There has been a lot of discussion in Oregon regarding the Village Board budget meeting that was held Monday, Oct. 7, specifically regarding the future of Jaycee Park. This is a good thing. The Jaycee Park West Renovation project is a big investment by the Village and will have a huge impact on the community going forward. It is important that we are all on the same page so the project can be a success and that any negative consequences can be mitigated or eliminated, if possible.

If you have not already done so, please read the information (pdf) we sent out to club members last week for background, and watch the video of the Oct. 7 Village Board meeting.

The discussion between Village Board members/Village staff and Oregon Soccer Club representatives starts at 3:08:30 and lasts for about half an hour. It is worth watching. Two other residents also spoke about soccer, and other sports organizations delivered statements. Please take the time to watch those.

Also, there was television news coverage of the situation:

Following the Board meeting, Village President Jeanne Carpenter sent responses to the emails she received from OSC members and concerned parties leading up to the meeting, as well as addressing some community members’ concerns/comments via Facebook. We have included a couple of those correspondences at the end of this message in case you haven’t seen them.

Between the Village Board meeting and the President’s public correspondences, some really good, important information is available. Unfortunately, there are also some points that Oregon Soccer Club feels are inaccurate and we would like to take this time to address some of them:

For the record, OSC feels the best solution to the Village’s long-term park issues involves creating more space for everyone. Ideally, a larger facility where soccer/lacrosse and baseball/softball are in the same spot so taxpayers are not asked to pay twice for parking lots, shelters, playground, storm water facilities, etc. Such a facility would give the clubs the ability to raise more money from tournaments, which in turn could be used to help offset some of the construction costs of the facility. Jaycee Park could then be available to rugby and Pickleball, providing room for future growth for these fast-growing sports, in addition to other types for recreational activity for Village residents.

Alternatively, now that the Village has committed to buying back the land on Alpine Parkway, perhaps that could be turned into a baseball/softball complex. The taxpayer dollars allocated to the Jaycee Park Renovation project could be re-purposed to give those sports additional space that could help address their impending growth. Soccer, lacrosse, rugby and Pickleball then could share Jaycee Park and the new Highlands of Netherwood Park. Such a project likely would take a little more time, but we believe all sports would benefit more in this scenario than under the current plan and no sports would be harmed.

Even if the current Jaycee Park Renovation plan is the only plan that is willing to be considered by the Village Board, why can’t there be a definitive plan in place to minimize disruption before construction?

We feel it is paramount that everyone understands exactly what is going on and how we got here so we can move forward to create solutions that will benefit all residents in the Village. We will be holding a public meeting on Sunday, Oct. 20 at the Rome Corners Intermediate School Commons, starting at 7:30 p.m. Anyone who is interested in this topic is welcome to attend, especially Village Board and Park Board members and representatives from other sports organizations.

Feel free to email the Oregon SC Board with any questions that you may have.

Thank you for reading,

"Thank you for taking the time to contact me and thank you for your passion on this subject. I'm glad you reached out to an elected official, so that I may have the opportunity to give you a fully rounded viewpoint. I'd encourage you to attend our village board and park board meetings, so that you may arm yourself with facts.

I'm sure you've seen one of the original Jaycee Park West concept plans, which showed four full size playing fields which accommodated four full size soccer fields. We were proceeding with this plan, until the soccer club sent a letter to the Village and appeared in person before a committee meeting, saying they did not support this plan and withdrew their support from the project. My memory of the reasoning for this was twofold: a) the soccer club told us they needed “more” fields, not just quality fields and b) as the club leadership very expressly shared last night at the Village Board/Park Board meeting, the soccer club is not interested in sharing facilities. They would like fields dedicated to soccer with “guaranteed” use and priority use. That's not how publicly-owned facilities work. For example, other sports clubs in the Village work with each other to share fields in the Village and outside of the Village.

In exciting news, the Village Board and Park Board endorsed a plan last evening to spend $1.3 million in 2020 to fully develop Highlands of Netherwood Park which will include one full size playing field which accommodates a full size soccer field or multiple smaller fields. This is an expenditure which will directly benefit the soccer club and is being done well before Jaycee Park West will even break ground. This park will have 77 parking stalls, a restroom/shelter facility, walking trails, and a tot lot for young kids.

In addition, the Village Board allocated $244,000 in funds in the 2020 budget to purchase property at Keller-Alpine Park. As a board, we are committed to master planning in 2020 this park and working with soccer to develop this property as a complex which could have up to six full size soccer fields at full buildout.

During the past 18 months, Village Board Members and our Public Works staff have looked at all of our Village Parks and identified numerous underutilized parks in the Village with open spaces that could accommodate full size and smaller soccer fields (temporary or “permanent”). We presented this list to Soccer representatives several months ago and the club leadership told us last night that nothing has been done by Soccer to evaluate these options. That is very disappointing.

The Village Board has been and will continue to be completely open with the planning for parks which will benefit all residents of the Village." 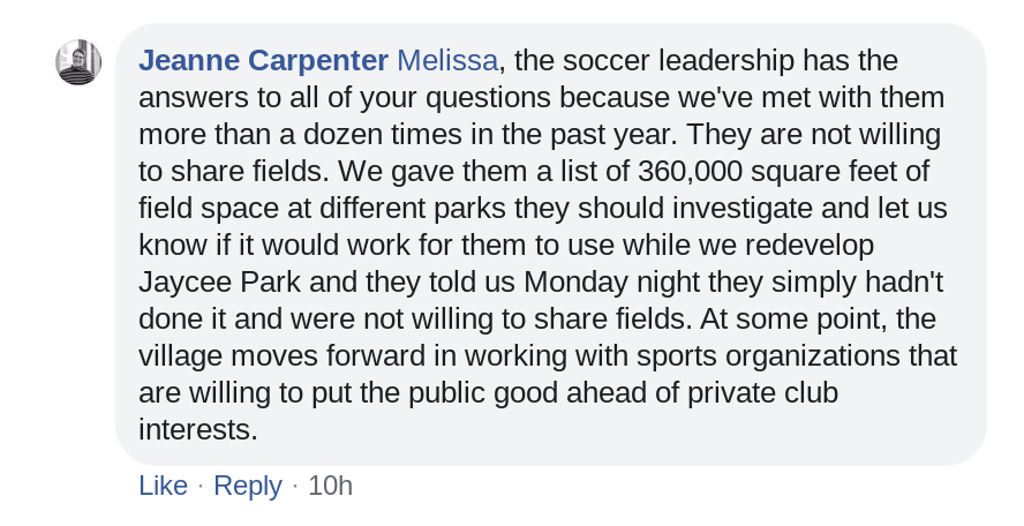